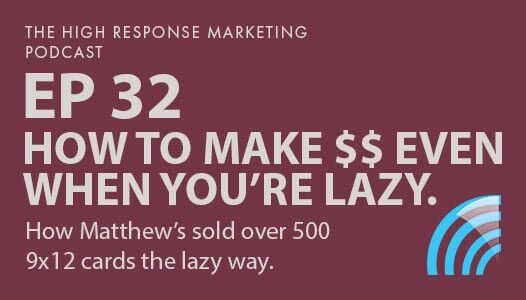 Two years ago in episode 11, Matthew S. shared how he’d gone from living in a minivan with his wife, daughter, and dog, to putting out over 100 9×12 cards. Matt lives in the Midwest (“dontcha know”) about 20 minutes away from a blue collar city of 80k.

So I asked if he’d give us some updates now (2 years later) as he’s crossed over 250 9×12 cards sold and with a little nagging … he obliged. And it’s a hell of an interview.

While some marketers use 9×12 as a “door opener” to sell other services or to get a client base and then move on, Matt’s an example of someone who does 9×12 for his full-time income and more specifically … so he doesn’t have to do much else throughout the month.

5:25 How easy everything has become now. He has an email list of about 400 advertisers that he mails to every month filling his cards mostly up. Then whatever he can’t fill across three cards he goes out and generates new business. His record is 54 ads in 3 days!

7:25 Collecting checks is is favourite activity. He now takes daughter (in his new truck),  playing music and going around collecting all the checks for ad spaces.  He talks about how he started by filling a card over the phone (no face to face) because he couldn’t afford gas to drive the 20 miles to town. Sold 8 spaces for $800/space.

9:45 What he thinks makes his cards so popular.

11:05 How he keeps everything organized and stays ahead of such a large amount of clients to follow up with all the time. Originally he had sticky notes plastered all over his car until he found this simple tool that’s done all the work for him (and you probably already have it but didn’t think of it before).

13:35 How everyone thinks he’s a drug dealer because he barely ever works. He talks about how hard he worked at this to reach the point where he just enjoys life doing nothing 90% of the month.

15:25 Even though he says it took him over a year to reach the point where he barely has to do anything,  he started off working incredible amounts of hours because he was selling A CARD OUT EVERY SINGLE WEEK.

18:00 How he does partial barters and trades for ads often. You won’t believe one of the types of barters he gets, particularly one that I’m going for IMMEDIATELY and never had even thought of myself.

27:25 How being lazy is fine but the difference between his laziness and other people’s.  (and why he can produce so many cards while still being incredibly lazy).

29:25 How his designer almost got him sued and put out of business.

34:45 One simple way he keeps competitors at bay.

36:00 This will be the first year he’s going to do 9×12’s during december and January, normally he takes them off but he’s got too many clients who want cards.

39:00: How he’s making more money than all his friends yet never seems to work.

Want Samples From Matthew?
$25 for 25-30 of them shipped priority mail