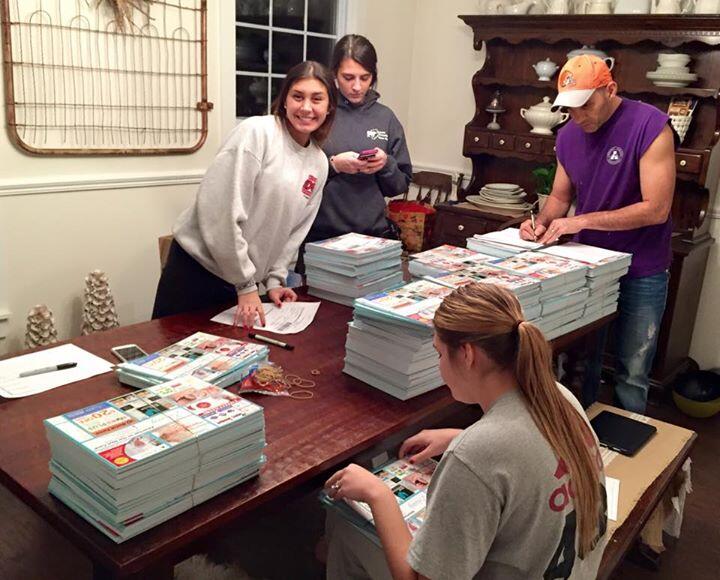 Family Business! I’m sure daughter #2 is checking postal routes and making sure the EDDM site is up and running ;)

Throw your “I don’t have enough time” excuses to the birds because the unstoppable team of Frank and Michelle G. have busier schedules than all of us but they make the time.

A card filled at max capacity in only EIGHT short days.

Frank’s a full-time firefighter and his wife Michelle runs their local marketing business (as well as a travel agency). To boot, they’ve got three daughters at home to take care of.

You’ll love every fleeting second of this interview, as it’s a non-stop barrage of golden nugget after golden nugget. You’d think that an episode clocking in at close to an hour would be filled with fluff and chatter, but there’s none… it’s all nothing but helpful experiences that you’ll be able to bring on to your business immediately.

New and reliable ‘ways of selling’ 9×12 don’t come around too often and I’m truly grateful for Frank and Michelle to share this with us; after their card turned profitable, they started selling a mix of barter and cash for their spaces…

They’re getting 50% or more in cash, but also getting an equal amount in barter… and on top of that… using the barter offer as a sales tool by gifting the bartered credit to friends and family they bring in. So they’re approaching prospects and leads with not only the value of exposure on the 9×12 card, but also that they’ll bring people in themselves or use their services personally.

You’ll understand it well when you listen to this call, it’s an incredibly cool tactic where everyone wins.

The first ten or so minutes Frank and Michelle share how they’ve been together since high school and never went to college but rather took the entreprenurial route. With whole days being taken up working as a firefighter, Frank had to narrow his prospecting down to only a few short days, giving him about eight until he filled his card to capacity.  He explains his approach to business owners and I think you’ll find it very refreshing and valuable for your own use.

11:55: Is a great part where Frank shares his motivational advice for those who can’t find the time.

14:20 Frank shares how discouraged and defeated he was the first day he went out prospeting, which resulted in nothing but no no no’s! … and of course how he plowed through it and lived to fight another day. In fact, he made “no” ‘music to his ear’s’. Frank also explains how much follow-up was important and how it sold over a dozen of his spots compared to ones who wrote a check on the spot.

18:20: This is where Frank and Michelle share their unique form of barter. They managed to get 120 free skating admissions, hundred in ballroom dancing credit, hundreds in gym membership, and even an astounding $6,000 worth of radio advertising… that they can use for themselves or as a gift to others!

28:00: Is more details on how they approached and sold the radio station deal. Use this yourself!

The rest is all fantastic information that’s simply just worth listening to. Forget anything else you’re doing over the next hour and swallow this stuff up whole; it’s divine.