How to Get Paid.

I remember when I first went out selling local marketing services and I couldn’t believe I kept getting paid by check.

I actually like checks, there are no transaction fees and they can’t be charged back.

But let’s cover some of the different formats so you can always get paid without a hitch: 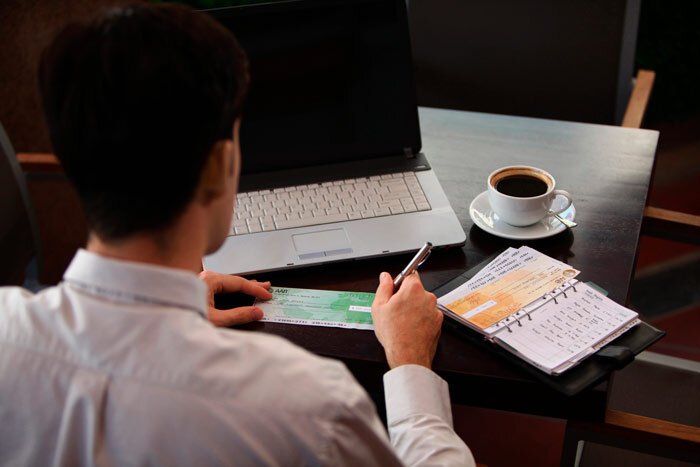 Accepting a check is easy, just have it written to your name. Or, if you created your DBA or LLC/Inc. you’d use your business name.

Why do business owners use checks still?

I’m not really sure. I think it’s just a relic from how times were, and anyone owning a business more than 15 years will have come from a time where it was just the norm.

It also feels a little more “safe” as the owner gets to control what money is going out more carefully. Whatever the reason, just be prepared to accept lots of checks.

Sorry for such stupid stock photography, it’s all I could find!

It’s wise to accept plastic, not just because of convenience, but for credibility.

If someone’s hesitant about trusting you, suggest using a credit card since they’re protected.

You’ll save a LOT of deals this way.

Being able to accept credit cards makes you look more credible right off the bat.

To accept cards, use the most simple option, squareup. They’ll even give you a free scanner that plugs into your phone.

It deposits within a couple days into your bank and you can even link it to your personal checking. Running credit cards do incur fees though, generally around 3%. The downside is you open yourself to the possibility of a chargeback in the future — so take checks if you can.

(PayPal also has a free credit card reader so if you like using your PayPal account feel free pick one of those up.)

Some business owners don’t always have cash budgeted to be spent!

A lot of owners won’t be comfortable spending a few hundred that they didn’t expect that day. Offering to take a credit card can instantly alleviate that and snag you a deal. The thing to remember is that THEY WON’T TELL YOU THIS.

They may give you objections like “I have to run it by my accountant”, “I have to think about it”, “I’ll have to get back to you”, etc. When really they just might not have the cash sitting around at the moment and don’t want to say that. By offering a deposit on a credit card you can crush those objections and uncover deals you would have missed.

With a PayPal account you accept credit cards through their reader or send an invoice over email.

I process quite a lot through paypal, particularly when doing business over email.

I like how trusted paypal as and find it’s very convenient for business owners too. Between being able to cash paper checks, credit cards, and PayPal, you’ll never have an issue taking payment.

Cash is great. Just make sure you give them a receipt when you get paid in green.

I buy the little receipt books you get from Staples and carry it with me in my car.

Downpayment, All Upfront, or Bill Later?

The best advice I can give you is: GET PAID BEFORE OR UPON SERVICES RENDERED.

Anyone who’s in the service industry knows how much it sucks to carry a balance of receivables. My local newspaper published a few years ago that they had over TWO MILLION dollars in outstanding balances from ad sales.

Almost anyone I know who bills later deals with outstanding balances that are a pain to collect. I even have approxiately $7,000 uncollectable balances, from being too generous and trusting over the years.

Businesses are notorious for not paying bills on time (or at all). They will drag these things out forever and make collecting money a nightmare.

What I do is get half down upfront and then collect the rest when they approve their artwork. I never go to print without collecting in full anymore, unless it’s a client I greatly trust. And if it’s for a significant amount

When Is It OK to Bill Later?

There will be times where it’s appropriate to let someone pay later, even after fulfillment. These times are either:

It’s unfortunate, but sometimes you may even have to turn down deals because of the billing terms. Some corporations will have extremely strict rules such as “we don’t have to pay until 90 days after” and that can crush you if you don’t have the capital to front the product. Imagine getting a deal for $10,000 with a cost of $6,000, but you have to wait 90 days to get the money.

The good news is, by the time you start getting more of those deals you’ll have already sold tons of smaller ones where getting payment upfront isn’t an issue.

How to terrify any other local marketers in your community …